From fortune seeker to evangelist 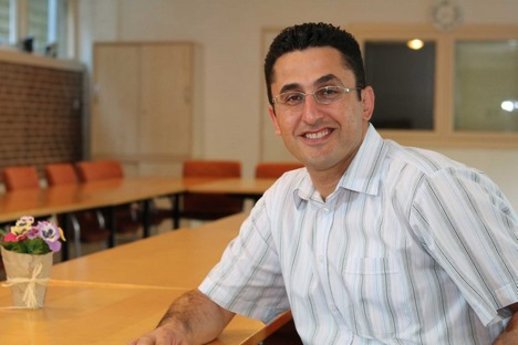 I’m Samer Younan, 41 years old. I was born and raised in Syria and came to Europe in 1999 to live happily and freely. I found happiness in prison in Austria. Jesus found me. And I found him. I have been sharing the gospel with others for years now. I am grateful that I can now also work as an evangelist in Utrecht. I would like to share my story with you.

From Syria to the Netherlands

In jail
I fled Syria to avoid compulsory military service, among other things. When I tried to enter Germany with a falsified document from Austria, I got arrested. I was sentenced to half a year in prison and was in a cell with seven others. I felt terrible and it smelled quite bad, because the toilet was in the same room.

Peace and freedom
The very first day I was there, they allowed us to leave the cell for an hour. We were taken to another building where you could read or watch TV. There was a Bible in Arabic. I opened it and started reading. The words touched my heart. I smuggled the Bible into the cell and could continue to read! I can`t remember exactly what I read then, but I experienced deep in my heart that God wanted to be my Father. I prayed: “Father, you have found me here. If you are already filling me with peace and your presence here in this miserable prison, you will be with me everywhere.” I decided to cooperate so that I would have to return to Syria, where a probable prison sentence would await me and 2.5 years of compulsory service.

But things went differently than I expected. The next day I had to go to the hospital for a medical check-up, accompanied by four guards. However, when I returned to the waiting room after the investigation, the guards had left. I didn’t know what to do, but the doctor said curtly to me: “go home.” For God, who had liberated me spiritually, it was not difficult to release me physically as well. He can change your life in one second.

To the Netherlands
I was taken care of by family in Germany and applied for asylum in the Netherlands. In the AZC in Stadskanaal I met a Christian for the first time: Betty, a widow with six children who evangelized among asylum seekers. She felt that God had a plan for me.

After a year and a half in the Netherlands, I had to return to Austria to go through the asylum process again. That was a difficult time. I experienced a spiritual struggle and doubted God’s existence, but I received peace when an African pastor prayed with me. I grew spiritually through close contact with other Christians, in Austria. Betty regularly visited me in Austria. We got married there, she was 50 and I was 23 years old. She was not only my wife, but also my teacher. God led my way to the Netherlands. There, encouraged by Betty, I went to study theology. She really helped me through it.

Evangelize
As an evangelist and pastoral worker, I currently work full-time for the Gospel & Muslims foundation. From there I am sent to different cities to preach the gospel. It has also become clear to me that God wants me to work in Utrecht. I can build a Christian community here for ICF Utrecht and share the gospel, especially among Arab people. I can give Bible study every Thursday. We also organize Arab missionary services. For this we invite Arab people to the AZC and we distribute 1,000 to 2,000 leaflets in Muslim neighborhoods in Utrecht, such as Kanaleneiland and Overvecht. Once a year we organize a two-day conference with a speaker from abroad. Arab people come from all over the Netherlands.

Teaching and discipleship
We want to disciple people who have received the gospel (learn to follow Him) and thus become mature in the faith, so that they themselves will also evangelize and assume responsibility. My greatest goal is for people to get to know Jesus and receive a new life. That is the best and most important thing. We are open to the guidance of the Spirit. If the Lord wants us to become a church, let His will be done. Together with other Arab people I also give pastoral care. We want to assist people who are broken.

God’s work clearly visible
I clearly see the work of God in people’s lives. People with different backgrounds come to faith, for example with an Islamic or Orthodox background. And there are people who serve the Lord with devotion. We have already had several baptisms.

Dream
I would very much like many people, including Dutch people, to be sent from their churches to work among Arab Muslims in the Netherlands. And that people with an Arabic and Dutch background together have a vision for Utrecht.